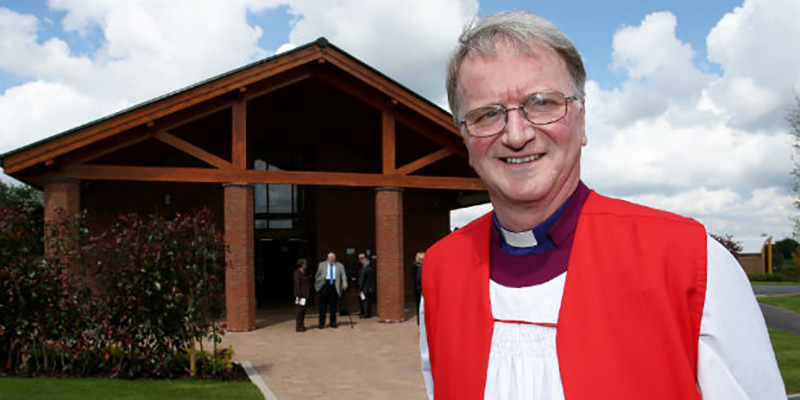 The suffragan Bishop of Sherwood, the Right Reverend Tony Porter pictured at Gedling Crematorium in Catfoot Lane, following a service of dedication.

A crematorium which caused controversy before it was even built has been blessed by a Bishop during an official launch ceremony.

Gedling Crematorium, in Catfoot Lane, had attracted opposition during the planning stage, with residents protesting over what they claimed was a loss of green belt land and increased traffic near the site, at the junction of Catfoot Lane and Mapperley Plains.

Gedling Borough Council's planning permission was challenged at the High Court, but a senior judge ruled that the permission granted to the Westerleigh Group should stand.

The first cremation was held at the facility in January and today, a service of dedication was led by the suffragan Bishop of Sherwood, the Right Reverend Tony Porter.

Other faith leaders also attended, including Canon Philipp Ziomek, of the Catholic Church of the Good Shepherd, in Woodthorpe, who gave an opening prayer, and local civil celebrant Victoria Corder.

Richard Evans, managing director of the Westerleigh Group, said: "We had a dedication service to mark the fact that the crematorium has been open since the beginning of the year.

"We have held over 300 services in that time.

"Mayor Barnes said she has attended six funerals at the crematorium and commented on how it had made such a difference to local families.

"It's much less busy than other crematoria and everyone commented on how wonderful the setting was, in fantastic countryside - it has a completely different feel about it.

"We allow up to an hour for services and people have the time to have a unhurried, dignified service.

"I thank Nottinghamshire for the support and help in ensuring the service is tailored to local needs. We can get on and deliver our promise to provide the best level of care. What's been really nice is how complimentary everyone was."

He added that some councillors who had originally been against the plans attended the service, and were pleased to see that the crematorium had blended in well with the countryside setting.

"We are hoping to prove to those people who objected that we are good neighbours," said Mr Evans.

Mr Evans said the Bishop provided a "wonderful address" on the importance of people being allowed to grieve and how it was such an important responsibility for crematorium staff to ensure they look after people with professional dignity.

The Bishop said: "It was a privilege to be invited to dedicate the new crematorium - particularly to see the care, the professional dignity and sensitivity that is shown to bereaved people."

Local funeral directors also attended, including Nigel Lymn Rose, of AW Lymn - The Family Funeral Service, who had initially objected to the plans as his 110-year-old firm wanted to open a crematorium in the area.

Mr Lymn, whose company conducted the first service at the crematorium, said: "As much as it's tinged with sadness that it's not our crematorium, I'm absolutely delighted that the needs of people in that area are now being served by the crematorium.

"We as a firm have found the management and staff to be excellent and they share the same values as us in always putting bereaved families first."

Mayor Barnes said: "We are just so lucky to have this special place, because it's absolutely stunning and very tastefully done. We couldn't ask for anything better."